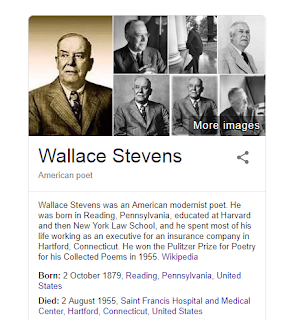 Below are few of the interesting poems of Wallace Stevens

which most have been analyzed for ease of understanding:

Analyzed Stevens Wallace Poem: Of Mere Being
If we had to pick our single favourite line from all of Wallace Stevens’s poems, it might have to be ‘The bird’s fire-fangled feathers dangle down’, the line which concludes this poem. In theory, the line shouldn’t work: the triple alliteration followed immediately by double d-alliteration should strike the reader as overdone…[CLICK HERE>>>]

Analysis of a Postcard from the Volcano by Wallace Stevens

The poem is more memory than disaster explained. A poem where the speaker imagined what will be considered of him after death. He assumed the children wouldn’t know how agile and fast they could run like “foxes on the hill”…[CLICK HERE>>>]
Analyzed Wallace Stevens Poem The Death of a Soldier
With the use of metaphor and the likes, war and seasons are placed side-by-side. The poet saw war as something that must occur season after season. Soldiers are the leaves the tree of war shed helplessly under the subject governing authorities…[CLICK HERE>>>]
Analysis of The Snow Man by Wallace Stevens
The Snow Man is a short five stanza poem. Each stanza is a tercet, meaning that it contains only three lines. The lines are unrhymed, creating a free verse form. This poem works as a single sentence, from the first word to the last it reads as a single idea. The Snow Man was first published in Poetry magazine in 192…[CLICK HERE>>>]
Analyzed Wallace Stevens Poem: Sunday Morning
“Sunday Morning” is a Wallace Stevens poem which focused on the issue of death and after-death. The poet was so concerned about whether aiming at the life after death is so worth the effort or humans should just concentrate on earthly pleasures…[CLICK HERE>>>]
Analyzed Wallace Stevens Poem (1879-1955)
By studying early twentieth-century poets, Stevens achieved his place among modern poets shortly before his death with Complete Poems of Wallace Stevens, which took a second National Book Award and a Pulitzer Prize

. After his demise from cancer on August 2, 1955, in Hartford, and interment at Cedar Hill Cemetery…[CLICK HERE>>>]


1. Analysis Of Living Is A Fire By Ben Okri

3. Analysis Of Bound By Ingrid Anderson

4. Analysis of Lament of the Frontier Guard by Ezra Pound