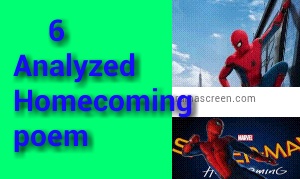 Homecoming is not just a common theme in literature but a very common title among many classic poets_ African and globally. It shouldn’t be a thing of surprise because it’s commonly said that home is where the heart is. Naijapoets  has seen few reasons to make a list of analyzed classic poems titled “Homecoming” .

Homecoming is a clever title for this poem as it references the narrator returning home having got their jacket dirty and later coming home from a late nig. Read Full Analysis>>>

Homecoming, poet Bruce Dawe uses vivid visual and aural poetic techniques to construct his an analysis of the novel the client by john … Read Full Analysis>>>

One among the many is “Homecoming”, a poem written with gentle tone of self-regret to reveal the theme of certainty of change. The poet … Read Full Analysis>>>

R. Parthsarthy’s poem “Homecoming” portrays a picture of his native state, Tamil Nadu as he returns from his sojourn abroad. He … Read Full Analysis>>>

“I came home with the ashes of she who was my wife,..” is the first line of the poem Homecoming by Sly Cheney-Coker to indicate that the poet’s motive was less of reminiscence rather of mourning.  Read Full Analysis >>>