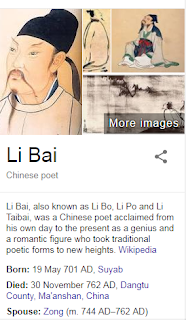 The Poet and Summary

Li Po is a Chinese poet born 19th of May, 701 AD. Some people also refer to him as LI Bai, Li Bo and so on. His poetic contribution keeps adding strength to Chinese poetry decades in decades out. other interesting poems “Exile’s Letter”, “Goodfellowship”, “The Long War”.Li Po died 30th of November, 762 AD.

A Poem of Changgan by Li Po is a love poem that buttresses the effects of a rigid distance between two lovers. As observed in the context of the poem, many factors such as weather, loneliness and fear of lost do cumulate to cause such distresses to lovers.

The first stanza of the poem quoted below shows that the voice of the poem and his traveled lover had been in love since tender age:
“My hair had hardly covered my forehead.
I was picking flowers, playing by my door,
When you, my lover, on a bamboo horse,
Came trotting in circles and throwing green plums.
We lived near together on a lane in Ch’ang-kan,
Both of us young and happy-hearted.”

In the second stanza, both lovers got married at age 14 but it doesn’t take long before the husband turned monster maltreating the wife. The wife respected the culture and the strong love she had for the husband thereby endured the cruelty of her husband.

In the third stanza quoted below, the bad turned to worse as her worst nightmare unfolded. Her husband went on travel by sea when she was 16 years of age living her with agonizing celibacy to contend. As she suffered loneliness while waiting through hot and wet nights, seasons began to roll upon seasons and his recognized footprints were overridden by growing grasses and mosses_ making her to fear how fast her beauty would fade:

“…Then when I was sixteen, you left on a long journey
Through the Gorges of Ch’u-t’ang, of rock and whirling water.
And then came the Fifth-month, more than I could bear,
And I tried to hear the monkeys in your lofty far-off sky.
Your footprints by our door, where I had watched you go,
Were hidden, every one of them, under green moss,
Hidden under moss too deep to sweep away.
And the first autumn wind added fallen leaves.
And now, in the Eighth-month, yellowing butterflies
Hover, two by two, in our west-garden grasses
And, because of all this, my heart is breaking
And I fear for my bright cheeks, lest they fade.”

In the forth stanza which concluded the poem, the voice of the poem noted that she wouldn’t mind the distance between where she resided and the place called “Chang-feng Sha” where his lover would arrive at via “Pa District”; so as to live with her husband again.

As said earlier, the poem is about love from the feminist perspective. The expressions of the poem are more of first person suggesting that women are more vulnerable in marriages.

They are the ones who mostly get drunk in love to bear the pain of love departure. The diction is simple and the flow is climactic starting from the origin of the love to the hope of reuniting. Many imageries in the poem reckoned with nature such as “rock and whirling water”, “lofty far-off sky”, “first autumn wind added fallen leaves”, etc.