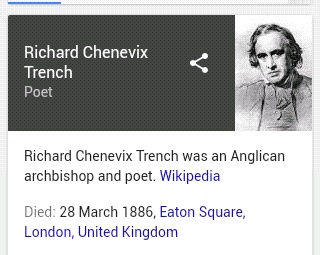 Evening Hymn is a poem written by Richard Chenevix Trench (1807-1886), an English poet born in Dublin; he was an Anglican Archbishop and lived with his wife and fourteen children in the church residence during his service years. Trench authored many anthologies and in one of his books appeared this poem titled “Evening Hymn”. A poem that eulogized the evening time. Where the evening of each given day was likened to a bell that alerts every living things on earth (humans, plants and animals) about the greater thing ahead which is nighttime. The message of the evening time is always so universally understood by all.

[Have Read At The Close Of A Day by Thomas Hardy]

Whenever the birds and animals are seen rushing back to their nests and dens, such is a prove of evening time (line 1-4) and in such time, a sailor voyaging on the sea does fill his brain with the memory of his home ( line 5-8). Evening time is “a still and holy time!” (so says line 9 of the poem) because the twilight creates an image of what is used to happen only in dreams.

The structure of the poem is of single verse with patterned end rhyme scheme. “Beasts” in line 3 is a metonymy, “tearful memory of home” in line 6 is an imagery, “far-off barren foam” in line 8 is a metaphor, “sunset seems” in line 10 is an alliteration, “like a pathway to a clime” in line 11 is a simile.

There are two deeper messages in the poem which are (1) Evening is a powerful messenger (2) Home is the best place. In the opening line of the poem, the poet referred to evening as a bell that sounds aloud: “To the sounds of evening bells” and such sounds controled the actions of the birds, humans and other animals. It also goes far as affecting the emotion of the sea travellers.
“…power to bring
Tearful memory of home
To the sailor wandering…”
The above excerpt from the poem shows how important home is to everyone including the sailor enjoying his ride through the wide sea.

Enunwa Chukwudinma S. aka samueldpoetry
(the Leo with wings flying)