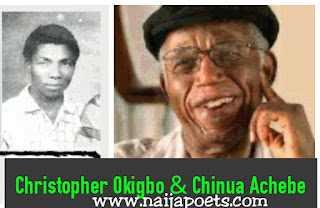 This is a mild elegy to the great memory of Christopher Okigbo, another classic African poet. With recipes of imagery such as “glass window pane” “sickly green” then an alliteration “Sky striking bravely to sink root” then rhetorical question such as “How long the feast on remnant flour at the pot bottom?” then repetition “beyond fable, beyond faith” and then “Danced, parted round its feet” is an instance of personification in the poem

Who is Christopher Okigbo? And who is Chinua Achebe?
Christopher Okigbo was a Nigerian librarian, teacher and poet who lived between 1932 and 1967; he lost his life fighting for the acquisition of Biafra and one among his well-known poem is Passion Flower while Chinua Achebe was a Nigerian novelist, poet and professor who lived between 1930 and 2013. Another name I will prefer call him is “Things Fall Apart” that is the best among his literary works on earth.

Chinua Achebe dedicated many poems to Christopher Okigbo and “Mango Seedling” written in May of 1968 is one of them.

Mango Seedling by Chinua Achebe is a free verse of 38 lines partitioned into 4 stanzas of unequal lengths.
With an urban setting, the poem narrated the little life span of a mango seedling which manifested its life in a place void of sufficient soils to sustain its living (the mango seedling was growing on a concrete roof in a second flour of a four storey office building). The second stanza of the poem saw Achebe questioning how long the happy seedling would live even though the brave mango seedling was stocked between unfathomable then in the third stanza, the poet blamed the rain for not helping the mango seedling move to a better place full of soil to sustain its future giant root. In stanza four, Chinua Achebe said he found the mango seedling in a couple of weeks later dead after gone from a little purple plant to a sickly green:
“It went from purple to sickly green
Before it died,
Today I see it still—
Dry, wire-thin in sun and dust of the dry months—
Headstone on tiny debris of passionate courage.”

“These days beyond fable, beyond faith?
Then I saw it
Poised in courageous impartiality
Between the primordial quarrel of Earth
And Sky striving bravely to sink roots
Into objectivity, mid-air in stone.”
From the excerpt above, Achebe claimed that the short-lived mango seedling resulted from the dissension between two major forces of nature; namely earth and sky, where the word sky is a metonymy for heaven. The mango seedling was so helpless even the rain which the poet referred to as “prime mover to this enterprise” could not move the mango seedling out its circumstantial danger.

Samuel C. Enunwa aka samueldpoetry
(the Leo With Wings Flying)