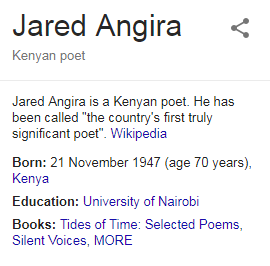 This poem is about the shameful murder of a tyrant.

He was stabbed and shut in front of a night club; the poet sarcastically compared his murder shut to a gunshot representing a last respect to a warrior.
Instead of the poem being a pure elegy, the poet created a sarcastic elegy which was beautified with irony and euphemism to show his dislike towards the wicked and selfish life led by the tyrant leader; it was so unfortunate for the dead politician who wished to have respected burial rite but ended with a belittled massacre.

The content of the poem is straightforward as a result of the simple diction maintained by the poet. Line 1-7 shows where and how the tyrant was buried, line 8-17 describes the event of his murder by comparing the murder gunshot, and state of his car, line 18-28 tells of the unwell condition of the masses and their state of no-say because they lived in a lower class, line 29-end is about the politician’s empty wish for a befitting end.

Few of the themes in the poem are uncertainty of life and living, shameful rewards for selfishness and wickedness, poverty within the masses, extravagance and embezzlement. The death of the tyrant proved that life is uncertain and whatever anyone sows, he/she will reap.

NO COFFIN, NO GRAVE

He was buried without a coffin
without a grave
the scavengers performed the
post-mortem
in the open mortuary
without sterilized knives
in front of the night club
stuttering rifles put up
the gun salute of the day
that was a state burial anyway
the car knelt
the red plate wept, wrapped
itself in blood its master’s
the diary revealed to the sea
the rain anchored there at last
isn’t our flag red, black, and
white?
so he wrapped himself well
who could signal yellow
when we had to leave politics
to the experts
and brood on books
brood on hunger
and schoolgirls
grumble under the black pot
sleep under torn mosquito net
and let lice lick our intestines
the lord of the bar, money
speaks madam
woman magnet, money speaks
madam
we only cover the stinking
darkness
of the cave of our mouths
and ask our father who is in hell
to judge him
the quick and the good
Well, his dairy, submarine of the
Third World War
showed he wished
to be buried in a gold-laden
coffin
like a VIP
under the jacaranda tree beside
his palace
a shelter for his grave
and much beer for the funeral
party
anyway one noisy pupil
suggested we bring
tractors and plough the land.
©copyright Jared Angira

According to wikipedia article, “Jared Angira (born 21 November 1947) is a Kenyan poet. He has been called “the country’s first truly significant poet.

Angira studied commerce at the University of Nairobi from 1968 until 1971.”
Samuel C. Enunwa aka samueldpoetry
(the Leo with wings flying)