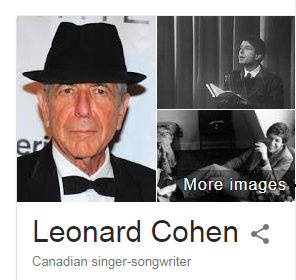 I do cherish poem that discuss issues ignored in name the name of some dogmatic believes. The poem title Story of Isaac by Leonard Cohen did just that.

Leonard Cohen is a poet whose nationality belongs to Canada. He stayed and enjoyed this earth the 21st of September 1934 and the 7th of November 2016. A poet whose work expresses religion, politics, life and more.

Wikipedia article also revealed that he was inducted into the Canadian Music Hall of Fame.

In the 48 line poem, titled “Story of Isaac”, he alluded to the biblical book of Genesis 22:9 where Abraham was instructed through vision to sacrifice his only son Isaac.

The poem not only shun the believers who still practice the ritual of children sacrifice but compared the old original scenario with the present practice.

The comparison were seen between lines 25 and 36;
“You who build these altars now
to sacrifice these children,
you must not do it anymore.
A scheme is not a vision
and you never have been tempted
by a demon or a god.
You who stand above them now,
your hatchets blunt and bloody,
you were not there before,
when I lay upon a mountain
and my father’s hand was trembling
with the beauty of the word.”
[ Click Here To Listen To Poem ]

From the above excerpt, the voice of the poem noted that those still practicing the ritual of children slaughter, do it as a scheme not as a vision guided act.
He also noted in line 35 that Abraham hands trembled while holding knife because the boy he was tempted to kill was his dearly loved son.

The poem ended in a contrasting parallelism.
The voice of the poem assumed if he shared the same faith with those slaughtering children for sacrifices, he wouldn’t hold any feeling of brotherhood when such practice has already questioned whether they are “man of peace or man of war” despite the symbol of grace and mercy their robes portray?