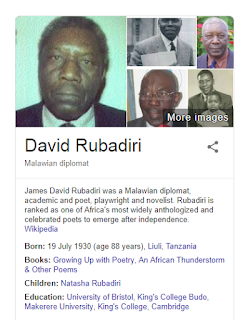 Fascination In The Poem Stanley Meet Mutesa by David Rubadiri

Such a time of it they had;The heat of the dayThe chill of the nightAnd the mosquitoes that followed.Such was the time andThey bound for a kingdom.The thin weary line of carriesWith tattered dirty rags to cover their backs;The battered bulky chestsThat kept on falling off their shaven heads.Their tempers high and hotThe sun fierce and scorchingWith it rose their spiritsWith its fall their hopes…[Details from the Source]

The poem talked about a group of explorers like in the case of Mungo Park. It reproduced what came before the attainment of colonialism

. The readers were shown how explorers suffered on their journey, at the end of the poem mere visit turned into colonization (“The gate of polished reed closes behind them/And the west is let in”) due to the lax of the owners( Mutesa) who joyfully welcome the visitor(Stanley).

[NOTE: Have you read Jack Mapanje’s When This Carnival Finally Closes]

Most readers are bound to be fascinated by the proper use of symbolism:
1 they bound for a kingdom (referring to Africa)
2 the village looked on ( village was used to show the level of African civilization)
3 the gate of polished reeds closes behind them ( referring to African architecture in the colonial era)
4 Stanley (symbolizes European) while Mutesa (symbolizes African)

There is personification in line 15 and 32
Alliteration can be found in line 9
The use of simile was present as well
The poet made use of strange language in the poem:”mtu mweupe karibu” in line 59 maybe the statement means “whiteman you are welcome” in line 60 such usage can be called vulgarism.

Stanley Meets Mutesa was written by David Rubadiri, a Malawian born in 1930. David Rubadiri was also the Malawi’s Ambassador to the United States in the year 1964 and later year in 1967, his novel No Bride Price was published.
READ MORE ANALYSIS>>>

(4) Analysis Of Hide And Seek By Vernon Scannell