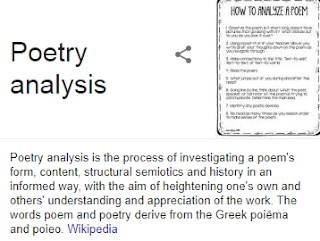 In case you know or may not know, few simple steps are required of you to analysis a poem to the best of your ability. They are in a question form:
(1) What few explanations can I give regarding the backgound of the poet?
(2) What recipes (poetic devices) do the poem acquire?
(3) What explanation can I give about the poem’s connotation and denotation?
(4) What categor(ies) can the poem be placed?
(5) What other poem(s) can you place side by side with the poem you’re analyzing?

It shows that by the time you begin answering the questions ome after the other, poetic analysis has began.

Some poems do have anonymous author maybe because they are traditional oral generated poems or maybe some unforeseen circumstances separated from their authors without retrace. Theose kind of poem ease the labor in poetic analysis since none will crucify you for not unearthing the broad background. Some poems do have real author and the translator to a different language. You must strive to give few background of both names involved to clear confusion. You are expected to give the right account of what you know about the poet (date of birth, date of death, family background, career life, marital life, achievements, etc).

The form,setting,mood,figures of speech found in the poem will be a great knowledge to those reading your analysis.
Under this atmosphere, you’ll figure out what type of poem it is. There are various types of poems (elegy,ballard,sonnet,sestina,acoustic,haiku,limerick,cinquain,diamonte,etc) which means you must study types of poem. You must be able to explain whether the poem is a free verse or blank verse and be able to point out the rhythm or rhyme scheme pattern if they exist within the poem you are analyzing. You will speak of the diction of the poem, the mood, the setting, etc. Diction can be referred to as the level of words’ clarity and their mode of presentation. Setting is the place or period or circumstance surrounding the event of the poem “Salute To The Elephant” has a rural forest setting. Mood is the mental or emotional state of the character in the poem. “To His Coy Mistress” has a worry mood. There are over 500 figures of speech or poetic devices but as a beginner you can at first get familiar with the common ones like simile, metaphor, imagery, personification, litotes, irony and see whether you can find few of them in the poem you’re analyzing; later you can start learning the remaining like merism, zuegma, anachronism, etc.

To analyze the connotation and denotation, you must understand what two words mean. Connotation is the deeper meaning, literary meaning, suggested meaning, implied meaning of a poem. Denotation is the surface meaning, explicit meaning, literal meaning of a poem; this where you figure the themes of the poem and its subject matter. You can explain the denotation of a poem by narrating the account of the poem in a prose form and while doing so, you must endeavor to shed light on some ambiguities in the poem.

There are so many categories for poem: religious, political, natural, romantic, lusty, lullaby, teenage, war, friendship, horror, crime, sport, travel, humor, etc. You identify where the poem belong. Poem can belong to more than one category. “Snake” by D.H. Lawrence should go under the category for nature. “A Taxi Driver On His Death” by Timothy Wangusa should be placed under the travel category.

You have any poem that looks similar either in message or style with the one you’re analyzing then it is a good idea to compare and contrast. “Mending Wall” by Robert Frost is similar to “Parable” by William Soutar. “Richard Cory” by Edward A. Robinson is similar to “The Icon Of My Town” by Samuel C. Enunwa.
Continue Reading >>>

Samuel C. Enunwa aka samueldpoetry
(the Leo with wings soaring up high)