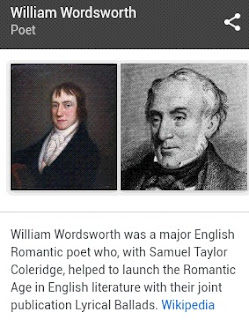 This is a poem about economy and its state of governance crafted by one of the classic poets, William Wordsworth. Naijapoets has been priviliged to analyze few of his many poetic contributions;

There are some occasions when a perfect nation derails as a result of poor governance or wrongly enacted policies. In such atmosphere, moral values are nowhere to be found and criminal acts are seen dominating. While many people gather to wonder what has gone wrong, the wise ones pick their hearts to crave the presence of a hero who is capable of creating the needed positive turnaround.

The poem title “London, 1802” by William Wordsworth, exemplified something similar. The poet recounted the time when London lost its track politically, religiously and socially. These are the reasons why the poem carry the theme of heroism, the theme of ill-governance, the theme of morality, the theme of nature, the theme of patriotism, etc.

Further on the theme is transcendence: “The idea of transcendence did not gain full speed until the Romantic Movement moved to America, but Wordsworth was certainly a fan of the idea long before then. “Transcendence” simply means “being without boundaries.” For Wordsworth, this means being able to connect with people and things outside of oneself, especially in terms of nature. It was Wordsworth’s supreme aspiration to metaphorically transcend the limitations of his body and connect completely with nature…[Details via the themes of London 1802 HERE]

From the view point of Gary R. Hess: ‘”London, 1802” simply begs Milton to return. It says that without him, England has turned into rubbish without literary talent. It states that he needs to return because we are selfish and need him to bring us happiness”.

[Read The Theme Of Loneliness In Daffodils By William Wordsworth ]

The poem is sculpted for the readers to view with sympathetic hearts as it possesses the tone of displease. The diction is old as opposed to the present-day use of English language “MILTON! thou shouldst be living at this hour” and being a fourteen-line poem arranged in form of an octave followed by a sestet; the poem is agreed to be a sonnet.
The rhyming pattern is ABBAABBA and ABBCAC. Other value added are the obvious simile in line 9 “Thy soul was like a Star, and dwelt apart”, metaphor and run-on-line in line 2-3 “she is a fen/ Of stagnant waters”.

I cherish the fact that Wordsworth did create exclusion when lamenting the problems London was witnessing at the time of composing the poem_ he expressed his mind with the pronoun “We” as seen in line 6 “We are selfish men”. His concerns were in double fold; the first being the great qualities possessed by John Milton who he considered the best fit to rescue situation. The second being the level of decadence in London around the year 1802.

I listened to the audio analysis of London 1802 by William Wordsworth and it is kind of more interesting.
Continue Reading>>>

Enunwa Chukwudinma S aka samueldpoetry
(the Leo with wings flying)