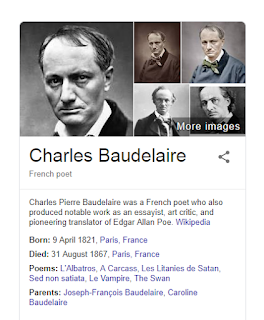 Charles Baudelaire is a French author and poet with many poems to his name; he lived forty six years on earth between 1821 and 1867. One among his notable poetry works is Les Fleurs Du Mal (The Flowers Of Evil

Lets look at the denotation of Music by Baudelaire. The poem gives a detailed experience of sailing; it talks about the foggy experience on the sea, the endless view of the sea, the waves waging war against the ship, the continuous sound of the ropes against the rigged mast of the ship, the calmness of the seas (which metaphorical was likened to a mirror). At the opening of the poem, the poet likened himself to a ship and likened music to a sailing experience on the sea. Music lifts the poet the same way the sea lifts the ship.

Naijapoets.com.ng has also analyzed other poems about sailing:
A review of one of his poem “The Jewels” goes thus: “The principal development of the poem follows a seduction scene in which the woman seduces, and thus psychologically dominates, the poet. The stage is set during the first two quatrains while the woman remains relatively passive. The poet is attracted to her, but his attention remains focused on her jewels. The only indication that the woman already controls the situation comes in the first line, where she is said to wear the jewels because…” [See the detail review of The Jewels]

a ship pushing through waves. In stanza 3, the passion heightened but stanza 4 described how the passion finally wanes gradually like a ship moving on a calm sea.

The poetic devices are simile in line 1 “Music doth uplift me like a sea”. Alliteration in line 2 “my planet pale”. Imagery (of sight) in line 3 “through dark fogs and heaven’s infinity”. Personification in line 5 “With breast advanced, drinking the winds that flee”. Metonymy in line 11 “Cradled by gentle winds” which means to be rocked like a baby.
MORE POETIC ANALYSIS >>>
Other Interest Analysis:

(1) Analysis Of Become The Journey By Femi Osofisan

(4) Summary Of Discord In Childhood By D. H. Lawrence


See What Is Trending on The Blog