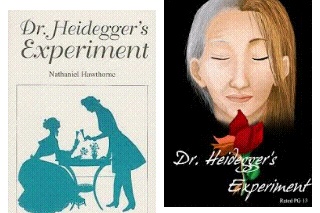 This is a short story about the crave for youthfulness. Most if not all the major characters in the story embraced the wish or opportunity of becoming youth again as seen in the plot of the story.

[There is a slideshow of Dr. Heidegger’s Experiment at prezi.com]

Besides other themes such as death, supernatural, morality; the theme of past mistakes will be butchered here.

[Must Read: 5 Analyzed Poems About Youthfulness]

The article on litchart also noted that “Dr. Heidegger’s (the main character) four friends are all characters whose reputations were tarnished in some way by mistakes they made in their youth. He chooses them as subjects because he wishes to see whether they will learn from their mistakes when given a second chance to be young.”

The author of Dr. Heidegger’s Experiment, [Order His Book: Twice-Told Tales] Nathaniel Hawthorne, was an American short story writer who lived between the year 1804 and 1864. His departure from this mortar earth was recorded to occur in Hampshire, United States.
Continue Reading >>>